By day, Eastin DeVerna is a mild-mannered English teacher. At night, he transforms into an all-powerful entity capable of creating or destroying entire worlds (mostly at night. Even gods prefer sleeping in). Eastin is a comic book writer, who – along with co-writer Ryan Davidson and artist Dan Buksa – created the new series Howl, which has gotten positive buzz. We spoke about the story world, his writing process, collaborating with a co-writer and artist, finding time to write with life always happening around you, what comics he’s reading these days, and what future works he has in store. 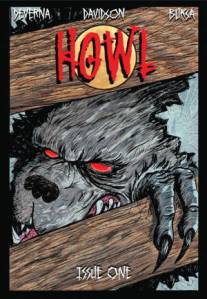 Publishing your own comic can seem as long a longshot as a spider bite giving you superpowers. Like a lot of creators today, you turned to crowdsourcing to help fund Howl. How was that experience? What has it yielded, for you and your backers?

EDeV: “The first issue is done, and that one has been distributed digitally…to the Kickstarter backers. That was actually finished before we did the Howl Kickstarter. We wanted that to be a reward that we could send out immediately once we were backed. I’ve backed a lot of Kickstarters before…sometimes it’s six months or a year or even two years before you finally get a reward. So we had that one finished, we paid for that out-of-pocket, Ryan and me. We funded issues two and three and the print run for issues one, two, and three.”

How did Howl originate?

EDeV: “[Ryan and I] probably came up with the idea in…2007 or 2008. We were talking…about what hasn’t been done.It was around the time that vampires were the biggest thing; zombies, The Walking Dead, all the movies. No one’d really tapped in on werewolves in a long time. END_OF_DOCUMENT_TOKEN_TO_BE_REPLACED