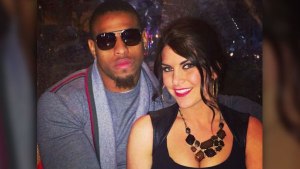 “He looked me in the eyes and he told me he was going to kill me. I was so scared I wanted to die. When he loosened his grip slightly, I said ‘Just do it. Kill me.'” He also “threw [me] onto a couch covered in assault rifles and/or shotguns.”

A 25-year-old man says this to a 24-year-old woman with his hands around her throat, adding, “Do you want to see crazy? I’ll show you crazy.”

Last week the same man, Greg Hardy, professional football player, returns to work for the first time since being convicted of assault and communicating threats (a verdict overturned when the woman he’d threatened to kill agreed to a settlement so a jury trial would be dropped) and having a ten-game suspension reduced to four.

Speaking to the media, the now-27-year-old man who threw the woman on a couch covered in guns talks of reporting back to work “guns blazing,” of regretting the fact that threatening and beating a woman has kept him away from his co-workers, who he hopes he hasn’t let down. He expresses no regret to the woman he choked and threw and told he would kill. END_OF_DOCUMENT_TOKEN_TO_BE_REPLACED

Had to call the cops today. The couple downstairs had one of their big blow-out fights that turn physical and then some. I was trying to develop my lesson plans for 4 classes tomorrow. But it’s hard to focus on rhetorical devices and structuring peer review when you hear a man yelling “Stop it! Stop it” over and over and a woman yelling “Call the police!” and “I can’t breathe!”

What do you do? I’m the only other person home, so I know they’ll know I’m the one who called the police. I know within a few hours of the cops coming by, they’ll get back together again and bond over hating me. I don’t want to have anything to do with their lives. Even more so, I don’t want to be complicit in her possible death.

Color me old-fashioned. But when a woman screams that she can’t breathe and would someone call the cops…I call the cops.

The landlord texted me a few minutes ago. The landlord always seems willing to believe these people’s stories. I understand: there are 2 of them, so they pay double what I do, so their word is literally twice as valuable. But dude. Come on.
They told the landlord there was no fight, that the girl was just having an asthma attack. Last time the cops came before this time, the man told them there’d been no fight, that the girl was just drunk and clumsy and had bumped into things.
I heard her, distinctly, say “Get off me,” then “Call the police,” then “I can’t breathe.” That is not what an asthma attack sounds like.

It’s an hour and a half since the police came. The girl’s gone now, but she’ll be back before long. The man is still downstairs. I’ve made zero progress on my lesson plans for tomorrow, because violence and abuse and circular self-destruction are squeakier wheels than “How is Alison Bechdel using metaphor in Fun Home?” and “Can you connect how Marjane Satrapi made you feel in Persepolis with why you suppose she did what she did?” and I only have so much oil to go around.

It’s 3:00. I have to leave my apartment in order to get work done. I’m so tired. In my bones tired. When I spoke with the 911 operator, what I gave off aura-wise was not anxiety, or fear, or concern. It was exhaustion. I’m fucking tired of not being able to work at home because the idiots beneath me don’t know how to act beyond hurting one another and coming back for more. I’m fucking tired of feeling like I’ve wandered into someone else’s punishment in Hades. Sisyphus would be tired of these people and their shit.

It’s 3:00 and my brain is light years away from professor mode. More like pie a la mode. My brain is a syrupy bowl of melted ice cream.

This week I begin looking for my 5th address in 9 months.

The downstairs kicking-and-screamers started arguing one minute ago. She just walked out of the apartment. He just stormed after her. If she does not leave, this will get physical. Quickly. If she does leave, it will get physical when she comes home in the middle of the night. END_OF_DOCUMENT_TOKEN_TO_BE_REPLACED

I moved into my current apartment around New Year’s Day. It’s the third floor in a house divided into three units, is super toasty and about a mile from the beach and kinda sorta perfectly-sized for a bachelor who spends the vast majority of his time writing & editing & professoring rather than bacheloring. I figured to be very happy here.
Two weeks after I moved in, a couple moved into the double unit just below me. In the month they’ve been here, the cops have been called on them 4 or 5 times, and could’ve been called another 4-5 times. They fight. Constantly. Violently. It’s ugly. He curses every other word and his larynx only appears to have two settings: silent and full-throated yelling.